One of the White Rock Gamers recently put together a French Legion force.  So it was time to get them on the table.  It was a crazy game with two French columns coming back to base from a "pacification" operation.  Of course, the Berbers inserted themselves to intercept the French.  Heavy casualties were suffered by both sides, but the French made it back. 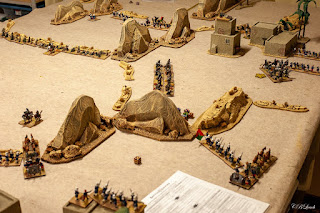